A Famous Irish Folk tale to be told.

The land of Ireland is well known for it’s magical tales of the Fair Folk and their dealings with us human beings. There is a rich seam of tales that has added to the belief of the Irish being great story weavers and the singer of songs (further evidence if needed by their huge success at the Eurovision Song contest). Here is a cracker of a tale from Ireland that should be enjoyed whilst wearing one of a nice pair of Aran Sweaters from Shamrock Gift so you can be comfy cosy. 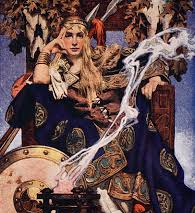 The Cattle Raid of Cooley. Irish mythology is full of strong female characters and Queen Maeve is no exception to that. Her legendary argument with her husband King Ailli Mac Mata brought about a huge war and this famous incident. It wasn’t about money and it wasn’t about jewels. It was about Land and Cow’s, back then the only real currency.

Queen Maeve did not like the fact that she had fewer Cows than her husband, to the tune of one less. To make things worse his Prize bull had previously been part of her herd and he was in no mood to give it back. She decided to get another one from the men of Ulster but they refused to give up their prize bull. Gathering an Army she raided the land but was stopped by the great hero Cu Chulainn (the Ulster Army was all taken ill). In the end Queen Maeve had to do the job herself. The two bulls fought and Maeve’s won leaving her with the biggest herd and the winner.