The other 12 angry men

Written by Galton and Simpson for Hancock’s half hour “12 Angry Men” is a parody of the film of the same name. It gives Tony Hancock, and his co-star Sid James full reign to deliver a performance that epitomises their characters. Hancock is able to be full of bluster, self importance and fake intellectualism whilst James can show Sid’s usual devious side. As any Gloucester Solicitors will tell you whilst unusual things happen in court this luckily rare. Dee and Griffin Gloucester solicitors are a good example of this. 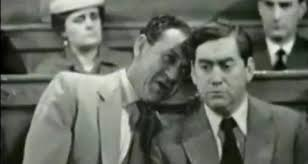 The episode centres on the trial of a jewel thief. All the evidence confirms his guilt and the decision to convict should be pretty straight forward. However, Hancock, unwisely elected as foreman of the jury, asks to see the evidence again. When the diamond ring is brought in Hancock tries it on only for it to get stuck on his finger. All attempts to remove it prove futile.

Most of the jurors want to agree he is guilty so that they can reach a unanimous verdict. Hancock is unsure and questions the man’s guilt. Initially Sid wants to vote guilty but when Hancock tells him they are being paid by the day to deliberate he suddenly says not guilty to string out the trial even longer. He only agrees to vote Guilty at the end (Hancock changes his mind) unless the others pay him for “loss of earnings”.

The episode features one of the best comedic lines, delivered perfectly by Hancock, ever. In an impassioned speech he says, “Does Magna Carta mean nothing to you? Did she die in vain?”