The Greeks and their taste for marble.

Every since Monty Python posed the question in the film  “The Life of Brian”, “what have the Roman’s ever done for us?” we’ve tended to forget that we should also ask that about the Greeks. Seeing as how the Romans stole most of the Greeks’ best ideas on law, medicine, politics and architecture, and the Romans were a huge influence on us in Britain, we do owe them a debt. For example, one of the greatest legacies from the Greek city states is their use of Marble Tiles. Some of the most incredible buildings from antiquity use this amazing stone. 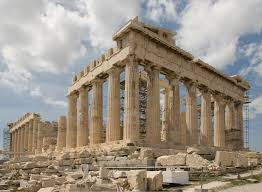 As the Greek city states of Athens and Sparta began to establish themselves their people realised that they needed to make structures that were more stable and would last longer. They also wanted something impressive to honour their Gods and greatest thinkers. Wood and canvas would not do in these circumstances.

They knew that stone was workable but marble was like a gift from Zeus. It was easy to cut out of rock and when you did it was also easy to trim into sections for columns and for archways that they called porticos. Soon all government buildings, religious temples, market places and public meeting areas were being made from the stuff.